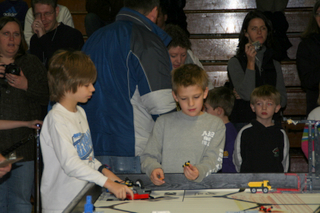 2 teams from Alexandria School District 206 competed in the 2006 First Lego League NanoQuest Challenge on December 2, 2006 in Minneapolis. (click here for photos).  FIRST LEGO League (FLL) is an exciting and fun international robotics program that ignites an enthusiasm for discovery, science, and technology in kids ages 9 to 14.  The topic for 2006 was Nanotechnology.  The kids had to research Nanotechnology and give a presentation on a problem that might be solved by the use of Nanotechnology.  They also had to build and program an automated lego robot to accomplish missions that were represented by objects that were also built with legos.  They were judged by points earned on the missions, the research project, teamwork, programming and robot design. Both teams, named the “Mini Men” and “Techno Freaks” did well, placing in the top ten.  Coaches and parents were quite proud of the kids who showed alot of intelligence and determination that blended well with their love of legos!